With the release of TaiG 2 anyone without specialized knowledge in the field of programming can open full access to the iPhone and iPad and install Cydia. The program has simple and intuitive interface, allowing “one-click” to perform the jailbreak of iOS 8.3. Users who still on iOS 8.0 and 8.1 because of the jailbreak, there is no point in waiting further. 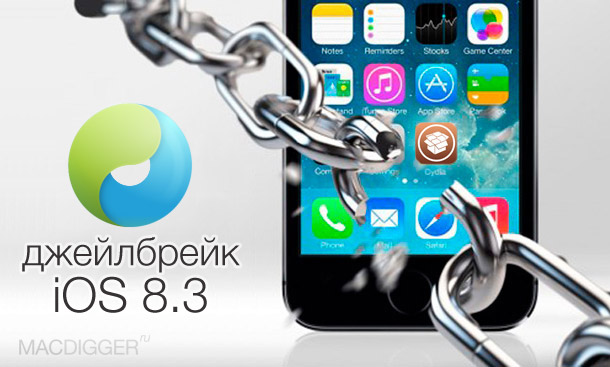 Hackers from TaiG in developing the exploit relied on authors store third-party apps, so have added an additional package. Initially it is intended to run hacked games and applications. However to apply you can opt out by unchecking the appropriate checkbox on the start screen.

Jailbreak TaiG iOS 8.3 is characterized by stability and convenience. In order to jailbreak iOS device, just connect it to your computer and press one button in the program window. After the restart the home screen will display a treasured icon of Cydia. Another significant reason to upgrade to iOS 8.3 are the features of the firmware. Update although ordinal, brought significant improvements in performance and stability.

MacDigger offers to discuss eight reasons to upgrade your operating system to iOS 8.3 and to jailbreak right now.

Jailbreak available for the current firmware

The new jailbreak is compatible with your operating system that is relevant at the current time. Not every time users have the ability to hack the firmware, which is signed by Apple.

Despite the initial concerns of users, created by Chinese hackers TaiG posed no threat. The program does not contain malicious code and does not set on the device, spies or any other “malware”. Veterans of the jailbreak movement has confirmed that the TaiG is not dangerous to users ‘ personal data. Only, as mentioned above, the exploit can put on the device store pirated apps, but its installation can be dispensed with.

Cydia is available for over 300 tweaks for iOS 8.3

At present, many developers have updated their tweaks. Now in total available in Cydia over 300 tweaks for iOS 8.3.

In recent updates, Apple has solved the main problem of the eighth edition of its platform – unstable operation. iOS 8.3 improved the stability and performance of the OS. Comparative testing of firmware confirmed that the updates have really improved the situation with the speed. In most cases, the application on iOS 8.3 will run faster than on iOS 8.0 or 8.1. Especially the owners are not happy with the new models: gadgets began to respond almost instantly, sometimes without any annoying pauses. This was achieved by optimizing the operating system.

One of the most highly anticipated features in the iOS 8.3 – Russified voice assistant Apple. Users who installed the update on iPhone and iPad, can ask questions and perform a series of standard actions using voice commands in Russian. In addition, the firmware now new “smilies”. In the Messages app, added a separate list, in fact is need for storage of spam.

In current iOS 8.3 has an app for the Apple Watch. Operating system supports application development tools for smart watches and is designed to work in conjunction with an electronic bracelet. As part of this update for the iPhone has received additional functionality associated with the Apple Watch.

To update iOS 8.3 in addition to the new features of the claimed errors are eliminated. The firmware includes a number of improvements, including in the field of security systems. This update includes bug fixes, increased stability and performance improvements for iPad 2 and iPhone 4s.

The release of iOS 8.4 next week

The release of iOS 8.4 is scheduled for June 30. This day will the final version of the operating system, which is tested Apple since April of this year. The composition of this firmware comes with a Music app with a new design and support for streaming Apple Music service. Shortly after the update Apple will close the “window” to jailbreak. Few days left to jump on the iOS 8.3 and jailbreak using TaiG.

Microsoft Office for iOS has received the support of the protected documents, simplified sharing and integration with Outlook

Microsoft has released an update for its mobile package of office applications. Office for iPhone and iPad contains all the basic functions of a desktop package and synchronized with the cloud service OneDrive. The main novelties introduced in patch 1.11 four: integration with Outlook, the ability to view protected documents, simplified sharing and support bidirectional […]

The flagship Sony Xperia X2 with thin frames around the screen

Among the new products that Sony will present at the upcoming exhibition MWC in Barcelona in 2017, will be the successor of the smartphone Sony Xperia X. the network appeared the first official press picture of the product, which has a slim frame around the screen. According to reports, the new high-end smartphones the Samsung […]