Despite its specificity, iPad Pro has become the most striking novelty of the year along with the iPhone 6s is left with the impression that Apple has once again decided to invent a new form factor. Did the thing, at first glance, confusing, but unexpectedly for many analysts, creating a whole niche, which will soon flood all the others. 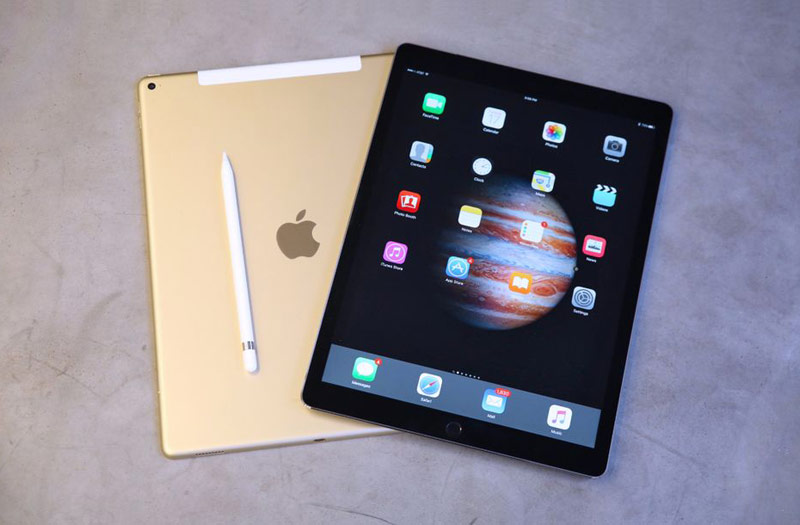 For users who prefer ultra-portability of the iPad mini or the balance of the iPad Air, the iPad Pro will be the perfect choice. But for total immersion in the world of Internet and apps a 12.9-inch, the gadget fits perfectly.

Brand keyboard for Apple Smart Cover can work as a stand. It combines many new technologies and materials. Portable but full-sized it connects to your iPad Pro via Smart Connector – the new interface connector Apple. Through the use of the new port to charge Smart Keyboard is not necessary. 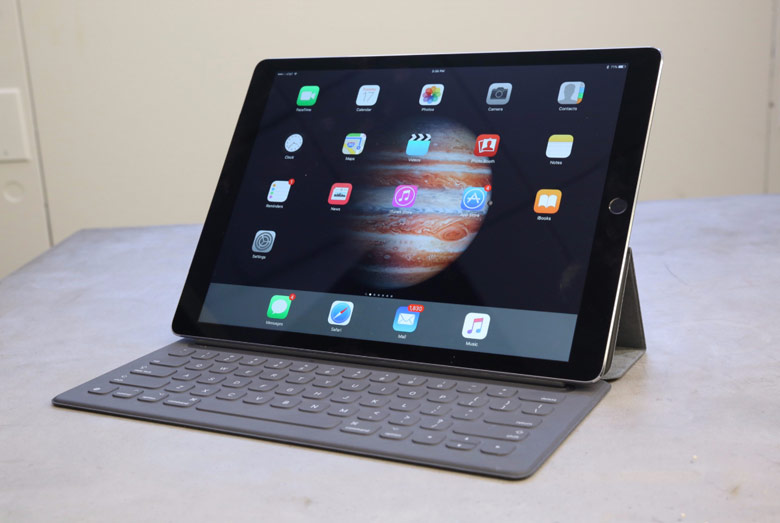 Need to type e-mail? Just open the Smart Keyboard. The deed is done? Just fold it, and it will turn into a lightweight cover for iPad Pro. Unlike conventional keyboards, Smart Keyboard between the keys there are no gaps. In addition, it is protected by a special coating, so not afraid of dirt and liquids.

Despite the advantages of Smart Keyboard in comparison with analogues, the accessory has a number of disadvantages: lack of backlit buttons, the price – in Russia gadget sold for 13 290 rubles – and the lack of localization: the Apple keyboard is only available in us layout.

Apple Pencil has become the main target for irony because of the words of Steve jobs about the futility of styluses. But the company’s decision to release a digital pen looks more than logical: the iPad Pro is perfect for drawing. Of course, the iPad almost since its appearance, there are many styluses – including those from Wacom. All of them allow you to draw on the screen, but not all of them allow it to do quite efficiently — there are simply no estimates of angle and pressure required to complete the work. Apple Pencil has it all. 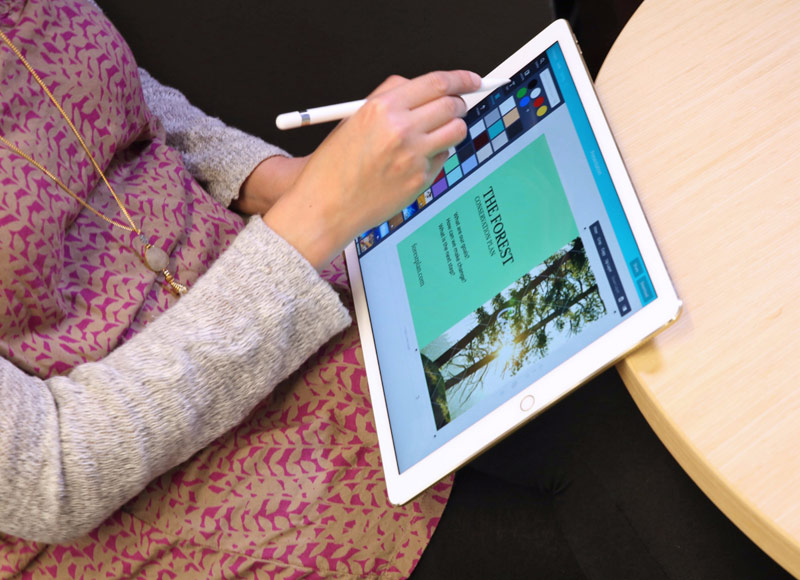 In addition, unlike analog Apple Pencil high response speed. The waiting time between the moment when the user started to draw and when the bar appeared on the screen, virtually no. iPad Pro knows when a person touches the display with your finger and once with a pencil. When working with Pencil Apple tablet picks up twice as many points than if a finger is touching, and the corresponding subsystem, it scans the signal with a frequency of 240 times per second. He has 2048 degrees of pressure – a variety of artistic effects is almost infinite.

The display iPad Pro makes an indelible first impression that comes down to two words: it’s huge. At tablet LCD screen diagonal of 12.9 inches with IPS-matrix, which is a resolution of 2732 × 2048 pixels. This preserves the density of the iPad Air and Air 2 is 264 ppi. The picture looks great: smooth fonts, some “roughness” and pixelation can be found, only armed with a magnifying glass. 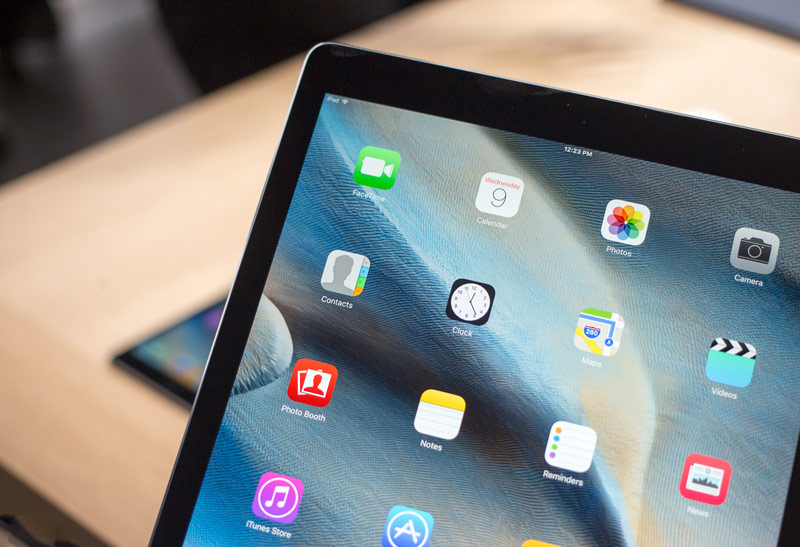 The screen brightness at maximum 392 CD/m2. Thanks to polarization filter and no air layer is enough anywhere – glare display is minimal, everything is readable even under direct sunlight. Viewing angles are very good. The luminosity of the black field at maximum brightness of just 0.26 CD/m2 and the contrast is impressive 1484:1. Noteworthy almost perfect match the color gamut of the sRGB standard for graphical applications it’s important.

The iPad Pro has excellent anti-glare properties, so the device without any problems you can use outdoors even Sunny summer day. The advantages also include efficient oleophobic coating, no air gap in the layers of the screen and flickering, high stability to the deviation of the black eyes from the perpendicular to the screen plane, good uniformity of the black field and excellent color balance. Currently the iPad Pro the best display of any tablet with a large screen.

While most laptops operate on Windows on a single charge no more than 5-6 hours, Apple devices provide up to 12 hours of battery life. Despite the very thin case, iPad Pro boasts a very capacious battery: 38,8 W*h (10 307 mAh), is able through the use of special display technology, “proski” to provide on average up to 10 hours of battery life. 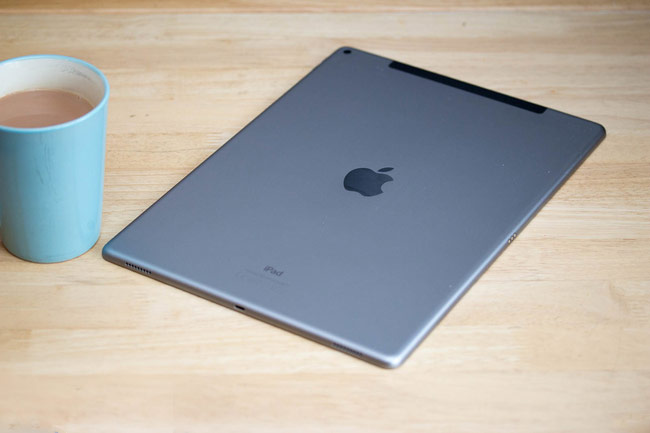 By using most of the battery discharge speed of the iPad Pro does not depend on the type of load, and from the brightness of the backlight. If the backlight is set at about 100 CD/m2, the tablet will easily work more than 17 hours (!) even when playing Full HD movie. Or more than eight hours in 3D games. When the brightness level of 200 CD/m2 life device operation from a single charge at once up to 8 hours. At maximum brightness the tablet will work for about 5 hours.

At the same time charging your iPad Pro for a long time: a full battery charge tablet bundled charger is about 6 hours.

iPad Pro looks a king among mobile devices and is comparable in performance with the younger versions of the MacBook Air 11, MacBook Air 13 and MacBook 12. It even allows you to run resource-intensive procedures like mounting video. 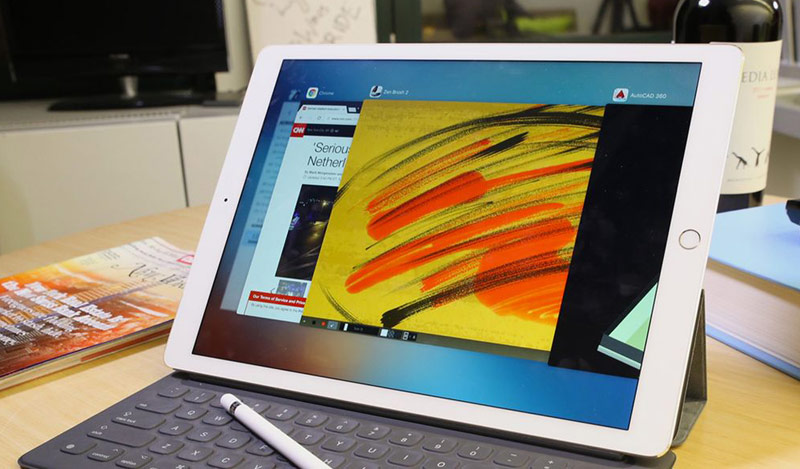 A 12.9-inch screen, the device leaves no choice, but to fight the thought “well he’s bigger than my laptop” is very difficult. However, to banish that thought is – “Proshka” is much thinner and a half to two times easier than any 13-inch ultrabook. If you fasten branded keyboard unit, little will change: it weighs almost like a standard Smart Cover and its a little thicker — 3.2 mm. the iPad Pro accessory helps in its functionality closer to the full laptop.

Remember the first iPad: how much skepticism and irony was spilled across the expanses of the world wide web immediately after the announcement, but a year later couldn’t understand how we’ve lived without a tablet – such a convenient “bedside gadgets”. So maybe a powerful iPad Pro with a huge and qualitative display will put a twist on the main home screen?

4 predictions about the future of the PC, which Steve jobs said in 1985. Was he right?

Company DisplayMate tested the new flagship smartphone Samsung Galaxy S8, evaluating a display panel of the device. The specialists called mobile Samsung best screens in the smartphone segment. The same thing happened this time. As stated in DisplayMate, the screen of the new Galaxy S8 is much better than the one installed in other Samsung […]