At the end of March Apple introduced a new modification of the branded tablet – the iPad Pro with 9.7-inch screen. As the iPad Air and second generation of the device has a Retina display with a resolution of 2048 x 1536 pixels and features a fingerprint scanner Touch ID. However, the possibility of a new tablet is much wider than its predecessor. 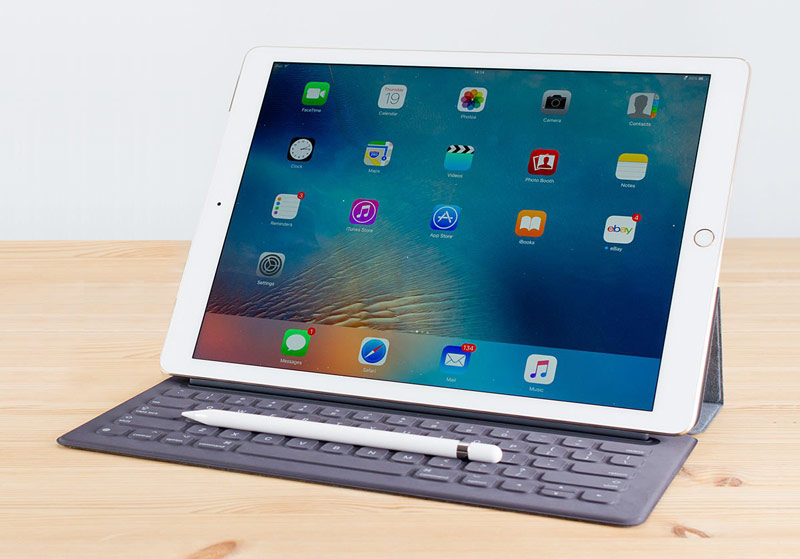 What innovations can offer an updated version of the most popular in the tablet market and what are the advantages over the iPad Pro iPad Air?

SE like the iPhone, the iPad Pro with 9.7 inch display is largely functional copy of the older model with a 12.9 inch display, but in a more compact package. The new reduced iPad Pro is used productive Apple A9X SoC with a clock speed of 2.16 GHz. Its capacity is 1.8 times higher than that of the iPad Air 2. Therefore, even complex processes such as video editing 4K, happen incredibly quickly and smoothly. In iPad Air 2 uses a previous generation processor Apple A8X. 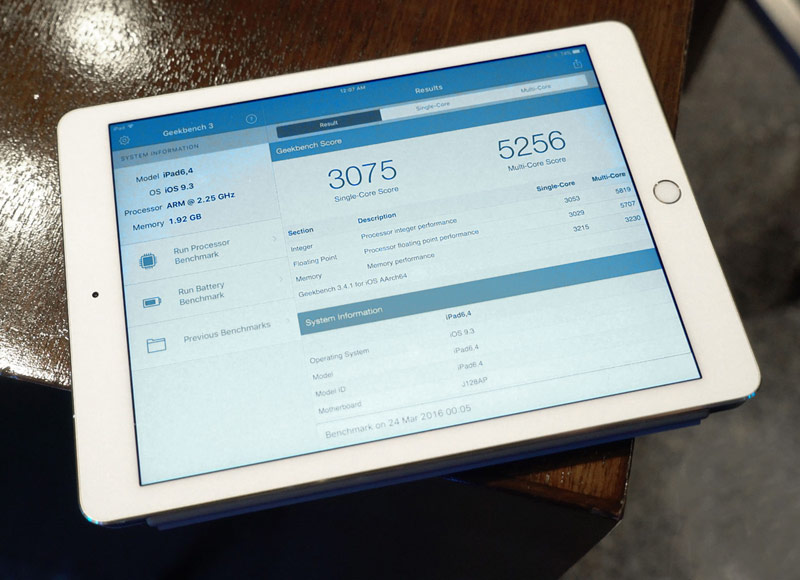 The iPad Pro’s display is 25% brighter than the iPad Air 2 and has a “classical” resolution of 2048×1536 pixels (264 pixels per inch). Compared to the iPad Air 2 and older iPad model Pro, the new tablet has a wider color gamut, allowing you to receive 25% more color saturation, as well as technology-enabled adaptation of the color temperature of the display is True Tone. It is 40% less prone to glare than display predecessor. 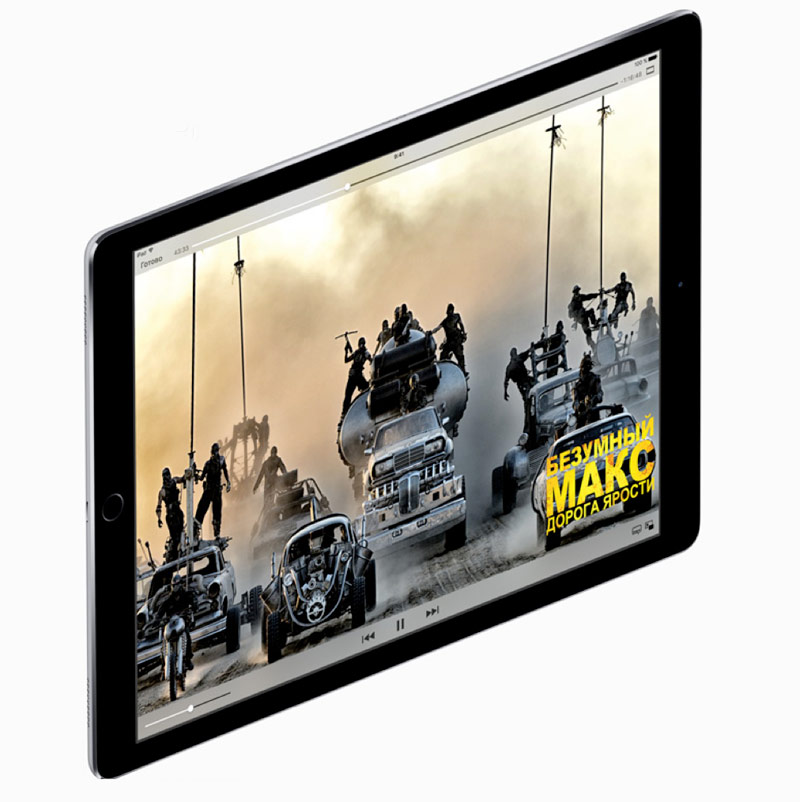 The new iPad Pro is equipped with better cameras than the iPad Air 2. Identical to that of the main iSight camera in iPhone 6s: matrix 12 megapixels (while its predecessor — only 8 megapixels), the ability to shoot HD video with 4K resolution and slow-motion 1080p video at 120 frames per second, support for “live photos” Live Photos. In addition, unlike all previous iPad models, a new feature True Tone flash on the rear panel. The front facing FaceTime camera, the new model also has a higher resolution than any other iPad, to 5 megapixels, and also support Retina Flash flash display. 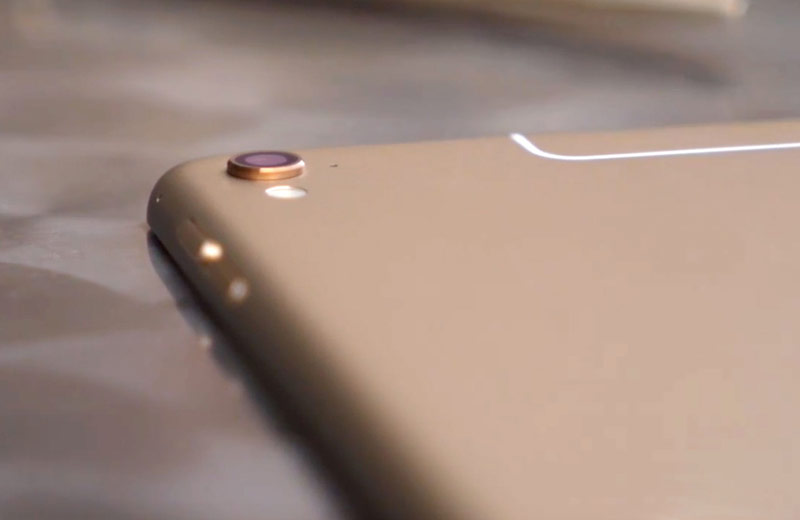 For the first time Apple has built into iOS device, and 256 GB of memory — this first volume of drive could boast except that MacBook. After selling a new generation iPad Pro iPad Air 2 is only sold in versions with 16 and 64 GB of memory. 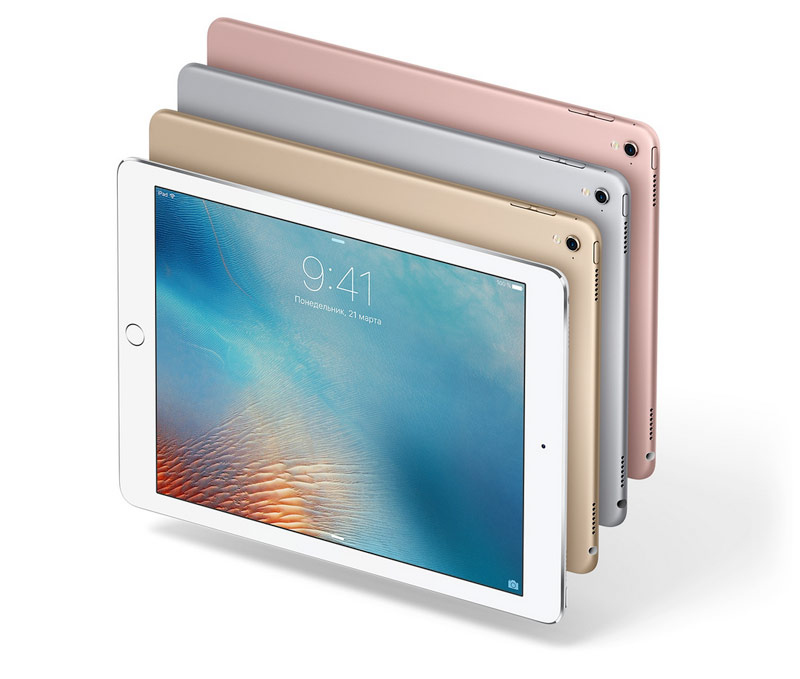 As the “older” iPad Pro speakers mini-versions are located at the corners of the body and create the effect of live and surround sound. Depending on how to hold the gadget, the iPad increases the level of high frequencies to those speakers that are in the top position. Tests tablet this advantage is particularly noticeable when watching movies and games. 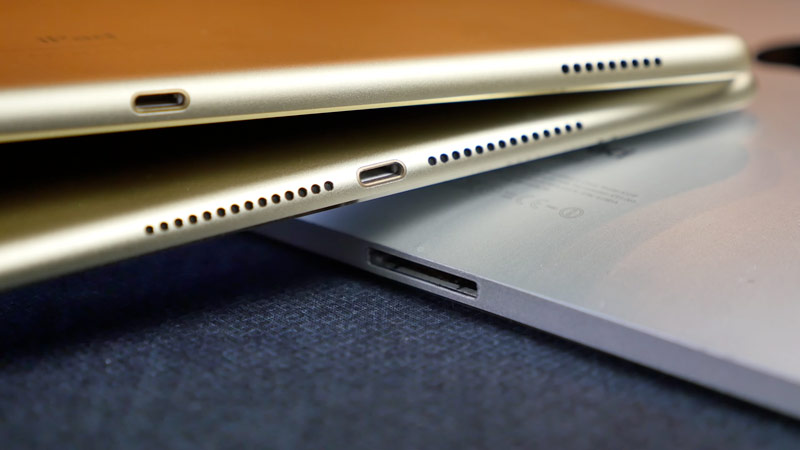 Apple offered users a 9.7-inch iPad Pro Smart Connector, a new connector that enables use with tablet brand keyboard Smart keyboard. This interface first debuted in a 12.9-inch tablet. He interacts with the conductive material inside the Smart Keyboard and provides bi-directional communication and power. The emergence of this standard will allow users to abandon Bluetooth accessories and connect your iPad to multiple peripheral devices – one using the Lightning connector, the second Smart Connector. 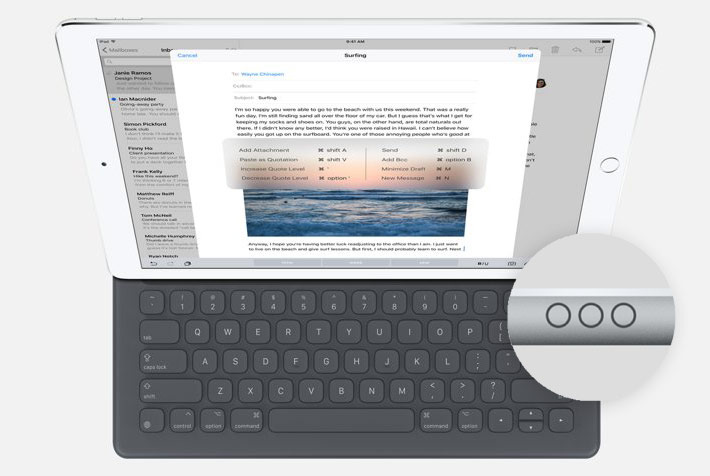 C the release of the iPhone 6s Apple gadgets have learned to take voice commands of the user in the background. The feature “Hey Siri” allows the smartphone to “listen” and respond to the voice of a man constantly. On the iPad Air 2 and even a 12.9-inch iPad Pro this technology does not work, despite the lack of technical limitations from hardware or software. Support is always active Siri is available in 9.7 inch iPad Pro. 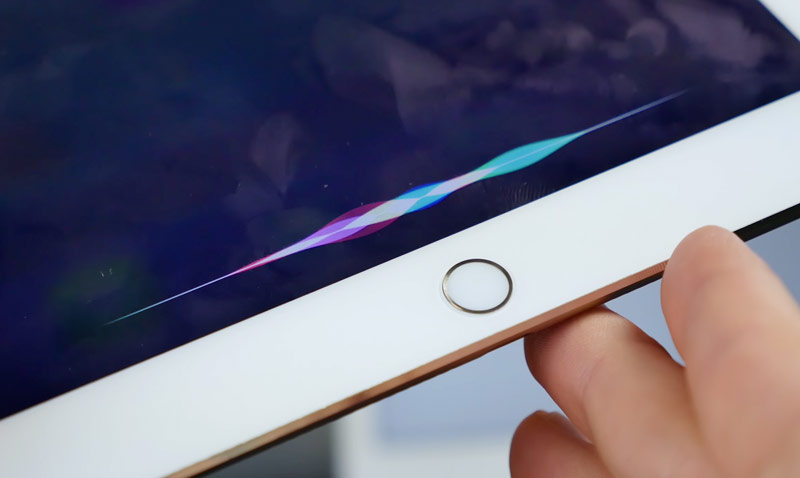 iPad Pro with 9.7 inch display with support for cellular networks include not only the standard tray for SIM-cards, but built-in Apple SIM. This allows you to connect to the tariff plans of different operators directly from the tablet. 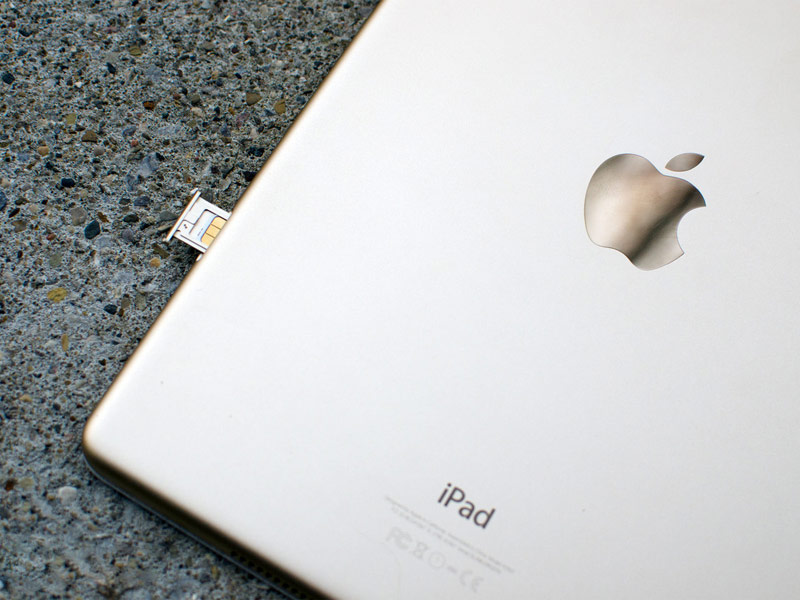 The iPad display is 9.7 Pro has a stylus support Apple Pencil, which went on sale along with a 12.9-inch option. The reaction of the small display on the iPad Pro stylus pen is practically no different from the one that shows his “big brother”. 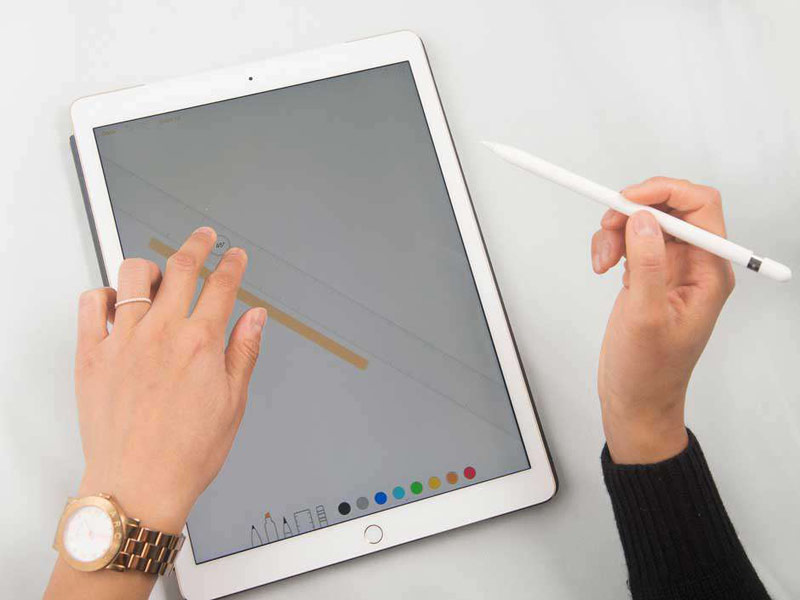 The new tablet is the first in the history of Apple, which is sold in the colour “rose gold”. For those who collect the entire collection of Apple gadgets in one color, it is an important factor. Also on sale are available in grey, silver and Golden models. 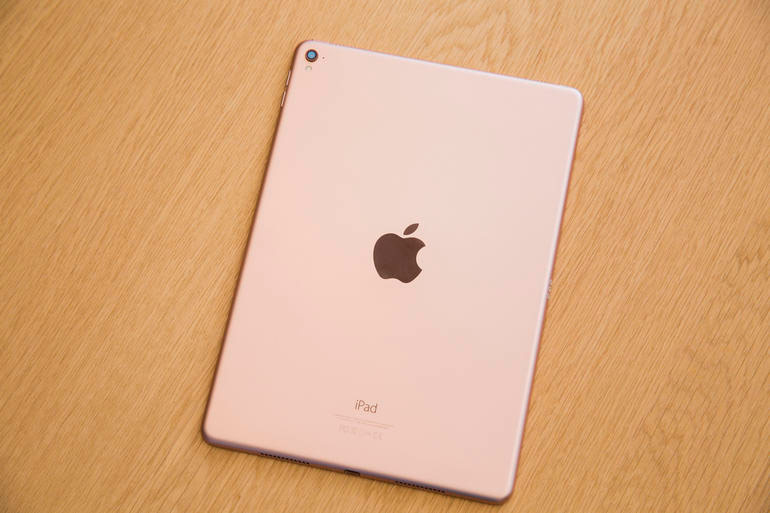 5 7 advantages of iPhone over the Samsung Galaxy S8

Has become a tradition to compare similar gadgets that not only perform in one class, but many borrow from each other, as a result, perceived by many at the same level. In fact, the difference between them can be enormous. At the beginning of 2017, Samsung announced its new flagship smartphone, the Galaxy S8 in […]

Case PhoneDrone Ethos will turn iPhone into a quadrocopter [video]

A modern smartphone is a portable multi-function computer. Developers quadrocopter PhoneDrone Ethos decided to use this fact when creating a new flying device. Made their “case” is a shell that is literally “inspires” the user’s phone. On kraudfandingovoy site Kickstarter startup xCraft successfully collects funds for the establishment of a quadrocopter, which uses the smartphone […]

Putin aide: eternal blocking sites does not work and only demeans power

Advisor to the President of Russia on development of the Internet, German Klimenko believes that eternal blocking sites does not work and only brings a reproach upon the government. He declared it in interview “to the Newspaper”. “When representatives of the authors lobbied for eternal locking of a domain, they themselves did not understand, about […]